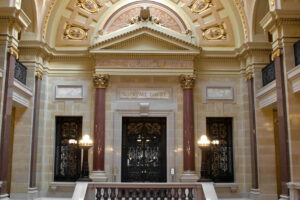 In every state throughout the U.S., governors are trying to figure out ways to keep their residents safe during this pandemic. That stands to reason, and Gov. Tony Evers, here in the state of Wisconsin, is no exception. Last year, he issued a stay-at-home order which was then overturned by the Wisconsin Supreme Court because Evers went beyond his authority according to our constitution. At the time, one justice described Evers’ order as “the very definition of tyranny.”

Gov. Evers has also spent the better part of this past year trying to keep a statewide mask mandate on the books over the objections of many Wisconsinites.

Last week, the Wisconsin Supreme Court ruled that Gov. Evers’ current mask mandate was unlawful and they struck it down by a vote of 4-3. The four in the majority are known to have conservative leanings while the three in the minority are known to have liberal leanings. In reality, this was a de facto party line vote. The purpose of this article is not to debate the merits of a mask mandate, or anything related to COVID for that matter. No, today I want to focus specifically on the statements from the Supreme Court justices as they explained their reasoning. Consider the following:

Justice Brian Hagedorn, in his decision for the majority, wrote, “The question in this case is not whether the governor acted wisely; it is whether he acted lawfully. We conclude he did not.”

Justice Ann Walsh Bradley, in her dissent, wrote, “We are in the midst of a worldwide pandemic that so far has claimed the lives of over a half million people in this country. And with the stakes so high, the majority not only arrives at erroneous conclusions, but it also obscures the consequence of its decision. Unfortunately, the ultimate consequence of the majority’s decision is that it places yet another roadblock to an effective governmental response to COVID-19.”

I hope you read those words carefully. If you need to, stop here and read them again. Notice how Hagedorn focused his decision on the constitution itself. The mask mandate is not a question of how good an idea it is. It’s not a question about the recommendations from health experts. The question, like all those presented to any state supreme court, is if the act was legal under the constitution. It’s that simple. Hagedorn’s statement about whether the governor acted lawfully could/should be applied to most any case that comes before the court. Now, on the other hand, consider Bradley’s statement. She didn’t once mention the law. Not only did she quote irrelevant statistics, she claims the decision places a roadblock in responding to COVID-19. She says that the majority justices obscured the consequence. Such an analysis is very irresponsible and unbecoming of a supreme court justice.

It’s not the responsibility of a supreme court judge to determine what is a good idea. It’s not their job to count the number of deaths and then use that information to decide if wearing a mask is warranted. And it’s not their job to look at the potential consequences of either side. They are not tasked with solving this pandemic. Their job is to determine if the action is lawful under our constitution. This is not hard to understand.

When you hear conservatives accuse liberal justices of legislating from the bench, this is exactly what we’re talking about. Judges are not supposed to analyze situations and make laws to solve them, no matter how good their idea. We elect other people to do that, it’s called the state legislature (the assembly and the senate).

There are a number of details and nuances to this case that I’m not addressing. Feel free to do your own research. But when it comes to the specific actions of the justices, those of the three liberal justices are a danger to all of us. They have overstepped their responsibilities whiletrying to decide if Gov. Evers overstepped his.

And if you’re thinking, “well, Scott, we’re in the middle of an unprecedented pandemic and we have to use unprecedented means to solve this”, well, that’s just ridiculous. Not only is our constitution always applicable, 24/7, it’s needed even more so during unprecedented times. There is no provision in our state constitution that says the governor can temporarily suspend its protections as long as it’s for the good of the people. How ridiculous would that be?

I’ve heard liberals blame the conservatives who filed these lawsuits, saying things like “our governor wants us to be safe and Republicans just don’t care.” That couldn’t be further from the truth. The difference between Democrats and Republicans in this regard is that Republicans want our leaders, especially our governor, to not overstep their legal authority. One of the following two statements must be true:

Fortunately, a majority of our supreme court saw through this and didn’t let him get a way with it.

Election day was just a few days ago here in Wisconsin. On the ballot were many local and state legislators, as well as a number of judges. It’s our job as voters to know the difference, and to hold these elected officials accountable. And if you don’t know the difference between the terms “legislative” and “judicial”, then you’re the reason this problem exists.