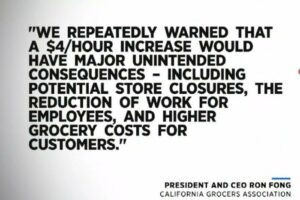 The wage debate continues. And while elected officials impose their partisan ways on their communities, regular people see first hand that the consequences are real. As a former local elected official, my energies are focused more on the actions of city councils rather than on state and national issues. This real life example from Long Beach, California proves that the political leanings and moral values of your city council matter. Don’t worry, while this example is Long Beach, I’ll bring this conversation back to De Pere, Wisconsin, where I live, at the end of the article. Please read on.

For many years, people have argued that the minimum wage should be increased. Statewide. Nationwide. Well, the Long Beach City Council decided not to wait for other levels of government. They passed an ordinance mandating that all grocery stores in the city with more than 15 employees must give their employees a $4 per hour raise. They’re calling it hazard pay due to the pandemic. Sounds nice, eh? These council members are the compassionate ones. They’re the ones who care about the common worker. They’re the ones you should vote for, right?

Well, as a result of their decision, two Long Beach grocery stores, Ralphs and Food 4 Less, have announced that they will close. For a little context, here’s the story from CBS Los Angeles from February 2, 2021:

Interesting story. First of all, the California Grocers Association warned Long Beach of the consequences of such a decision. They told them straight up that it would have major consequences, including store closures. But the city council didn’t care. Opposing the grocers association was Derek Smith from UFCW Local 324 who spoke at their meeting about how such an increase would help their 1300+ union members working in Long Beach. Smith said that these employees were struggling due to COVID and needed this ordinance. Well, I wonder how they feel now that they no longer have jobs.

These elected officials are just idiots. They pass an ordinance thinking that they can force a company to stay in their city. The mayor even said he’s going to pursue legal action. Such ignorance on display. Someone once said, “you can’t legislate your way into prosperity.” The job of government is to get out of the way and create a climate where businesses can take risks and be successful. But in Long Beach, they don’t understand this; they feel they can just make laws to force businesses to do things. It’s so backwards. This is what we conservatives mean when we say we want smaller government. And what’s happening today in Long Beach is what happens when liberals create more government. Yes, this is not just a state and national issue, it’s happening in small cities.

So, now that the store closures in Long Beach have been announced, neighbors are expressing their sadness. Not only are they disappointed at losing their neighborhood store, but they know employees personally and they feel bad for their struggles.

I found the comments of one shopper, Larry Judd, interesting. He said, “It doesn’t make sense. They’re making money hand over fist and yet they choose to just abandon two stores because they don’t want to pay the extra money. It just doesn’t seem fair.” Judd is just as ignorant as the city council. I’ll spare you my lecture on why companies need to be able to make a profit. But what strikes me is that Larry Judd has just as much opportunity as anyone else. If he feels that it’s possible to operate a store while paying those higher wages, he should open a store. He can take over the market and reap the benefits of what he thinks is Ralph’s poor decision.

Even if a company is making a significant profit, why would they want to continue to operate in a small municipality like Long Beach when they can operate the same store a couple of miles down the road in a neighboring town with lower costs? This is not greed! It’s the American way. Don’t make me lecture you on the concept of business profits. This is the concept upon which America was built.

The Long Beach City Council is similar to the De Pere City Council, where I live and served for 8 years. We have a mayor and 8 alderpersons while Long Beach has a mayor and 9 councilmembers. But there’s a big difference in how we’ve handled the pandemic. Here in De Pere, I was still on the city council when COVID-19 hit. We knew we needed to do something but we also knew our limitations (in other words, the limitations of our taxpayers who were already struggling). So we put together an interest-free loan fund for our businesses. In Long Beach, they also knew they needed to do something, but they punted and said, “hey businesses, pay your people more.” And they even made it a law. See the difference? How noble of them.

It’s no wonder residents are fleeing California by the thousands. If you ever want to see a current, up-to-the-minute view of how things are going in these California towns, check the rate to rent a 26′ U-Haul truck from Los Angeles to Austin, and then immediately check the rate for the same truck going the other way. Just to be sure you know how this works, when U-Haul (or any moving company) has a surplus of trucks in one location, the cost of moving to that location increases while the cost of moving in the other direction decreases. These are just facts, no opinions from me or reporters. I’ll save you a few keystrokes; here’s a comparison that I just did.

So, why all this tangent on people leaving California, the cost of moving, etc? Because this is where liberal values lead you. The above information is factual. And if the people of Long Beach could go back in time to where we are here in De Pere, they’d do it in a heartbeat so that they could make different choices and elect different people to their city council.

So, to my neighbors here in De Pere who love our small town as much as I do, pay attention. Know your candidates. And don’t let De Pere become another Long Beach.

1) As with many issues requiring a vote, it’s often not as simple as it seems. In Long Beach, they voted on the ordinance, but due to a procedural error, they had to call a special meeting and vote again, which they did on Friday, January 22, 2021. You can see info about that meeting (agenda, minutes, video/audio) on their web site:

And if you want to know how each councilperson voted here is the detail: