it’s not a boycott, I just don’t watch any more 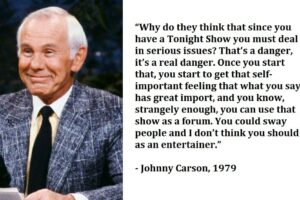 There’s a restaurant on the east side of town that, for many years, was like your typical bar and grill. You could get a good burger or a steak, a beer, you name it. Before or after dinner you could pony up to the bar for a cocktail. I’ve been there many times. Then a couple of years ago, the owners decided to change it to a Japanese restaurant. I don’t eat Japanese food, so I no longer go there. It’s not a protest or a boycott. They just changed their product, and I’m no longer part of their target audience.

The same thing is happening throughout American society today; many popular institutions are changing their product.

For decades, I enjoyed watching late night TV shows and award shows. Since I especially enjoy watching live bands, the Grammy awards were always a go-to for me. But then, like the restaurant on the east side of town, they changed their product. They now include politics in their shows (though they won’t say so in their ads). I’m not talking about political satire; I’m talking about political commentary, their personal opinions. And, like the restaurant on the east side of town, I no longer watch late night TV shows or award shows. It’s not a protest or a boycott. They just changed their product and I’m no longer part of their target audience.

“Why do they think that since you have a Tonight Show you must deal in serious issues? That’s a danger, it’s a real danger. Once you start that, you start to get that self-important feeling that what you say has great import, and you know, strangely enough, you can use that show as a forum. You could sway people and I don’t think you should as an entertainer.”

Unfortunately, this trend is now happening in American sports. I’ve been a fan of the Green Bay Packers my entire life. Like many fans, I have my favorite memorabilia on display in my home. I have plenty of Packers jerseys. I’m also the owner of the oldest Packers-related website in the world (which I just closed in Feb 2021 after 26 seasons). And I’m a season ticket holder, and a stock holder. Nothing special really, around these parts. But in recent years, the NFL also started venturing into political commentary. Instead of just “football”, it’s now “football and political opinions”. Like the restaurant on the east side of town, they’ve changed their product. And in 2020, I stopped going there. I didn’t watch a single NFL snap last season. It’s not a protest or a boycott. They just changed their product, and I’m no longer part of their target audience.

With all that’s going on in our world these days coupled with advances in access to information and politics, why do these institutions think that we don’t have enough politics in our lives? Why do they think we need more? And why do they think that they are my best source for more? It’s not enough for me to get my politics when I need it, and then on Sunday afternoon just watch some football. I love politics. I love election day. I was a local elected official for eight years. I do my homework, I know my elected representatives. But I also love my entertainment and I need my down time. Watching these TV shows and football games used to be my escape from the world’s worries. It also afforded me a connection to my fellow fans, I was part of a community. But what used to be simply “entertainment” for me is now “entertainment and political commentary”. I just can’t take it anymore.

There’s one thing that all of these institutions have in common, though. They’re all made up of rich celebrities who have no idea the kind of life I live and the challenges that face my community every day. They just don’t have my perspective. Yet for some reason they feel the need to project their political opinion on me, the fan.

Yes, these people have every right to their opinions; I’m not suggesting they stay quiet. But, anyone of these people — celebrities, movie stars, athletes — could call a press conference on their day off and say anything they want. They’d get plenty of coverage from the press. They could start their own blog. People would hear them. I’d have no problem with that. But instead, they choose to force their opinions onto their fans while they’re working, while they’re entertaining.

I’m sure more organizations will follow suit with these trends. The best telltale sign that things are going south is when fans or patrons of a particular organization are taking political sides when they never used to in the past. Imagine choosing your grocery store or restaurant based on your political views. Mark my words, this is gonna get worse before it gets better.

Postscript – Interestingly, I started writing this article a few weeks ago, and now, on the day I publish it, I just read a headline indicating that MLB is getting into politics. I started following the Angels when I started dating my wife in California in 1985. We’ve gone to many games together in Anaheim. I even had the great privilege of singing our national anthem at an Angels/Indians game once. And, as Angels fans now living in Wisconsin, we’ve been subscribing to MLB.TV for years so that we can follow our team from afar. Last night, I watched the Angels win the opener against the White Sox. I really enjoyed that, I had missed watching professional team sports. But, with today’s announcement, that’ll be the only game I watch this season. I just need a break from politics, and now MLB won’t give that to me. It’s not a protest or a boycott. They just changed their product, and I’m no longer part of their target audience.